Ever since I got my first BBS02 2 years ago I pretty much gave up on pedal assist for anything except riding on the road. The stock programming on the BBS02 from the factory is absolute crap and it takes a lot of pedal movement to get the PAS system to activate and then after you stop pedaling the motor keeps running for up to 25 feet depending on your current speed. Can you imagine going full-bore in the woods and having a problem so you stop pedaling and the motor keeps driving you forward another 25 feet? A lot can happen in 25 feet on the trail and trees are painful and the big ones won’t get out of your way no matter how hard you hit them.

The BBS02 kit ships with the fancy ebrakes but the problem is once you touch the ebrakes the motor will completely cut out for several seconds. This is also useless in the woods because you need to use the throttle and the brakes interchangeably all the time without those annoying delays. Most of my BBS02 & BBSHD units I simply disabled the PAS connector inside the controller as soon as I got the units which gave me 5 different levels of pedal assist. Several days ago while riding Duh Banana Bike with its fancy new N380 IGH (review is here) I started to wonder if I might try messing with the programming and giving PAS on the BBS02 another try. It took me several hours of tweaking, but in the end, I prevailed against the machines (I always do) and found settings that worked pretty darn well without having to use or install any annoying ebrakes on my singletrack builds.

This whole idea started the way many of my ideas start, from my beautiful wife. She had been talking incessantly about ways that ‘we could work together and start losing some weight’. This essentially translates into ‘You’re getting too fat for me to want to make love to anymore, so you better do something about that or else’. Biking with  a motor has not helped because I quickly learned that if I don’t pedal then I can go a lot faster and not have dramatic wipe-outs.

Nuvinci CVT’s are only warrantied to 250W but can take oh so much more power than that.

The rest of the year when I start feeling guilty about my sympathy weight (I’m preparing for my wife’s inevitable pregnancy) I just whip out the non-ebike and take it out day after day until the guilt subsides into late night snacking on chips dipped in Miracle Whip (true story). In the winter time that is basically impossible because the trail conditions are so bad that it would take an insane amount of energy to just get going walking speed on a bike in the woods. Between the frost heaves, ice, frozen puddles, and snow you just can’t produce enough power out of those skinny chicken legs to have any fun. 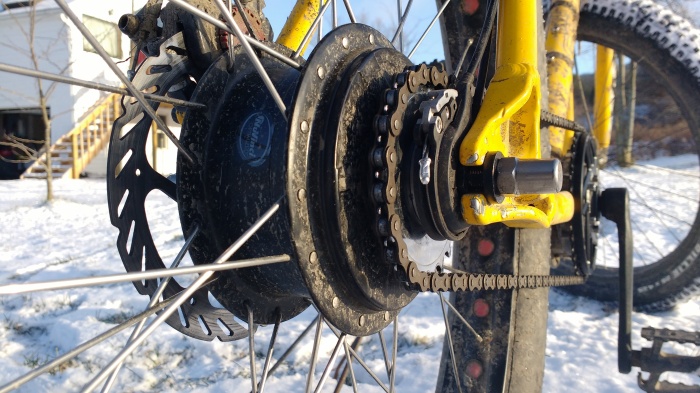 Enter the N380, this 5lb CVT has completely changed my life and my riding style, for the better.

Several weeks ago I got around to mounting a Nuvinci N380 onto my Duh Banana Bike build and have been riding it around frequently. This little CVT has gotten me to start pedaling again because I have an unlimited number of ‘gears’ to choose from and I can even use the grip sh!t shifter like a motorcycle throttle. If I want more power then I twist it down and it changes the gearing ratios and I get way more speed. If I need to climb hills I twist it forward and the bike slows down and climbs like a billy goat from hell. *Baaaaaa* The whole system is seamless and feels the way that riding an electric bike should feel.

I end up drifting back to my demo of the Felt Lebowski torque-sensing, overpriced & underpowered Bosch drive system and wonder if there is any way I can get a similar experience on a BBS02 by tweaking its programming. Don’t get me wrong, I will NEVER own a Bosch driven e-bike. I just can’t justify spending $5800 on just one bike. My Duh Banana Bike has set me back <$1000 even with the Nuvinci and it is one of the finest e-bikes I’ve ever ridden even without a torque sensing system.

With the Lekkie Bling Ring and a 22T cog you get perfect ratios and a clean chain line. Perfect harmony.

Although I was pedaling along with the BBS02 with the N380 installed, because my thumb was a little trigger happy I wasn’t really burning any calories. What I needed was some way to wean myself off the throttle and get back to burning calories again. I spent several hours changing all the settings for the PAS system on the BBS02 until I finally got some that I liked. If you want to learn to program your controller then you will need to check out these articles here and here (there will be a test).

I will go over the changes I made to the Pedal Assist page one by one here.

These settings changed my riding style for the better

Start Current: 10 – I didn’t change this although you could if you wanted more of a kick in the pants when you took off. I want my N380 to last so I left it at 10.

Slow start Mode: 4 – I messed around with this a little bit but I didn’t like how jerky it was at the higher settings so I left it at 4

Startup Degree(signal no): 2 – This option made some really strange behavior when I set it to 1 so I set it to 2 instead. This is the minimum amount of rotation the system can really accept before power kicks on. The Bosch samples the pedal 2000 times a second to anticipate what you want to do. The BBSxx, not so much. I found this was OK because I could just use the thumb throttle to get started when the bike stalled out on a hill and then as soon as my legs were pumping I’d let off the throttle and away it would go.

Time of stop: 10 – This is the most important option to change and it is the one that will send you 25 feet down the trail into a tree. If you set it lower than 10 then PAS stops working. Obviously, we can’t have that. Version A of the BBS02 will allow you to set this as low as 5, but Version B will only allow 10 as the lowest setting.

Current Decay: 8 – I set this as high as I could because I didn’t WANT the BBS02 to provide less power if I pedaled faster. It works well on 8.

Stop Decay: 0 – Leave this at zero, I don’t care what Kepler says.

The rest of my settings on the other pages were the same as em3ev’s default settings. For the BBS02 download kickpasbbs02.doc and rename it to ‘KickPASBBS02.el‘ then load it into the Bafang program. If you have a BBSHD then you will want to download kickpasbbshd.doc and rename it to ‘KickPASBBSHD.el’ and load it into the program. Programming your controller will void your warranty and no one will help you if it breaks. God helps those who help themselves.

UPDATE: I have been testing these settings pretty extensively on the BBSHD on my Phat Phuk build without issues. If you want to shift with a normal derailleur then you must stop pedaling, shift the gears then start pedaling again. The power ramps up nicely so your gears won’t grind. Too much. The CVT is a much more pleasant experience all around and I plan on mounting a BBSHD on my Sun Kiss build and mating it with the Nexus-3 IGH. I expect the Nexus to work well with the BBSHD with these new PAS settings.

So what do I do if my programming causes my bike or me to crash and burn? Is your health insurance paid up?

Before you make these programming changes and take an e-bike that puts out 1300 watts of peak power (the US limit is 750W) you might want to think twice about what the hell you’re doing. Just one trip to the hospital is going to make that fancy $5800 Bosch e-bike look like a pretty good deal. You are riding a home build e-bike without ebrakes in the woods where you will be flying by lots of immovable trees often at speeds over 20 mph on several inches of snow which has marginal traction often over ice which has no traction at all. There are a lot easier ways to get exercise. You could learn how to pole dance, that might come in handy as a career option too if you ever need quick cash. Although I am writing an article about doing this I in no way think that it is a good idea for you to do at all. Also, if you sue me all you’ll get is a giant pile of broken e-bike parts & batteries and a shed full of unsaleable electric fat bikes.

I found that setting the BBS02 to PAS level 2 was about perfect for most of my riding. I liked how the power would cut out almost immediately after I stopped pedaling and also how the power would creep up slowly on me and would keep coming as long as my legs kept moving. I discovered long ago that as long as my legs were pumping I would actually put energy into the pedals, if they weren’t moving at all obviously I wouldn’t. Getting exercise while biking doesn’t necessarily mean you have a fancy torque sensing motor system, but rather that you have a controller that has a close enough synergy with your pedaling style that you can ‘sync up’ and get into the flow of it. It can’t be overstated how much the N380 helps in this endeavor.

Since the BBS02 does not have an auto power cut out when you want to shift if you try this PAS powered system without a gear sensor or without tapping the ebrakes to switch gears you will mangle your derailer and drive train pretty quickly. I’m speaking from experience on this. It looks like Bafang is selling future BBSHD units with a gear sensor plug built-in but you will need to buy a gear sensor from someone else to make it actually work.

The N380 and the BBS02 with the right settings just feels right in the woods. When I want more power I twist the CVT back and pedal and I get the power I need. When I want to cut the power I push the CVT shifter forward and slow down. This gives you a level of control over the power of the BBS02 that you just don’t have otherwise. I can highly recommend this configuration although I do so with a grain of salt because if you cross this bridge, you probably won’t go back. I can’t say that you won’t regret it if and when you ever do get injured.

That was a double negative meaning that you will probably regret reading this article when you’re in the hospital and your limbs are in traction.