There are now dozens of different battery cells being made by the big manufacturers LG, Samsung, Panasonic, & Sony. For use in an application like an Electric Unicycle, the two qualities that make a particular cell more suitable over another are it’s power output (Amps) & energy density (Ah).

Until fairly recently there was an inevitable trade-off between either high-powered cells (e.g. Sony VC3/A123) and energy dense cells—there’s the example of the Panasonic NCR18650B, which had capacity, but could only deliver 2-3 sustained Amps.

What has been one of the key drivers in powering the Personal Electric Vehicle revolution, is the introduction of >3Ah (>10Wh) batteries which can ALSO capable of sustaining high currents above 10 Amps. 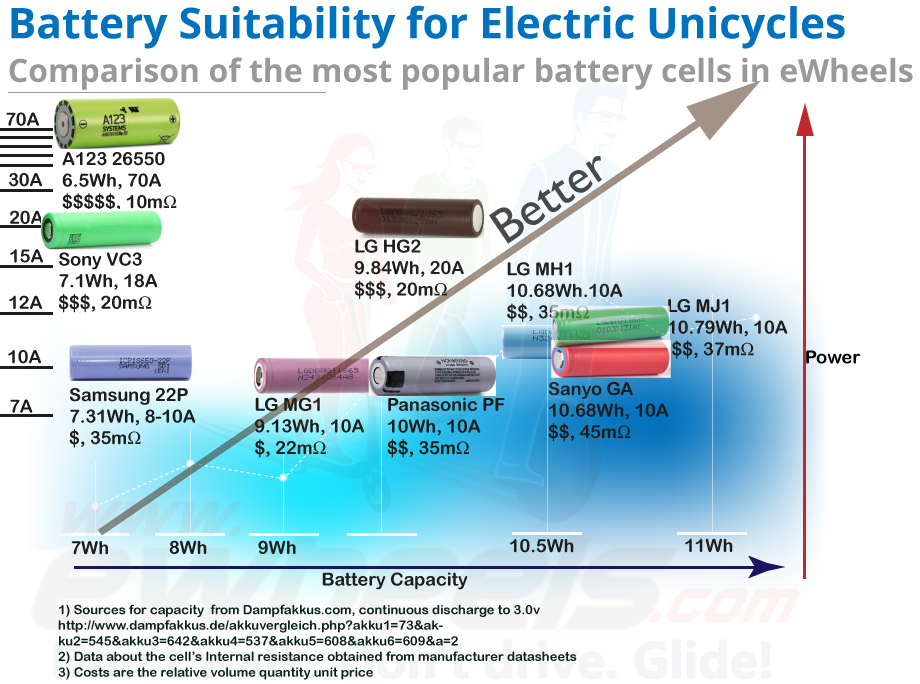 The Battery cells which are most commonly found in Electric Unicycles are shown above. Although lacking in capacity & somewhat outdated, the Samsung 22Ps are still quite common for many Self-Balancing devices, because the cost per cell is very low.

Ideally, a smaller battery pack (<32 cells) would have more powerful cells, like the HG2 (found in our small 12″ IPS a130s) or the VC3 (used in the Solowheel) to provide the necessary sustained power even, if the speeds are modest. 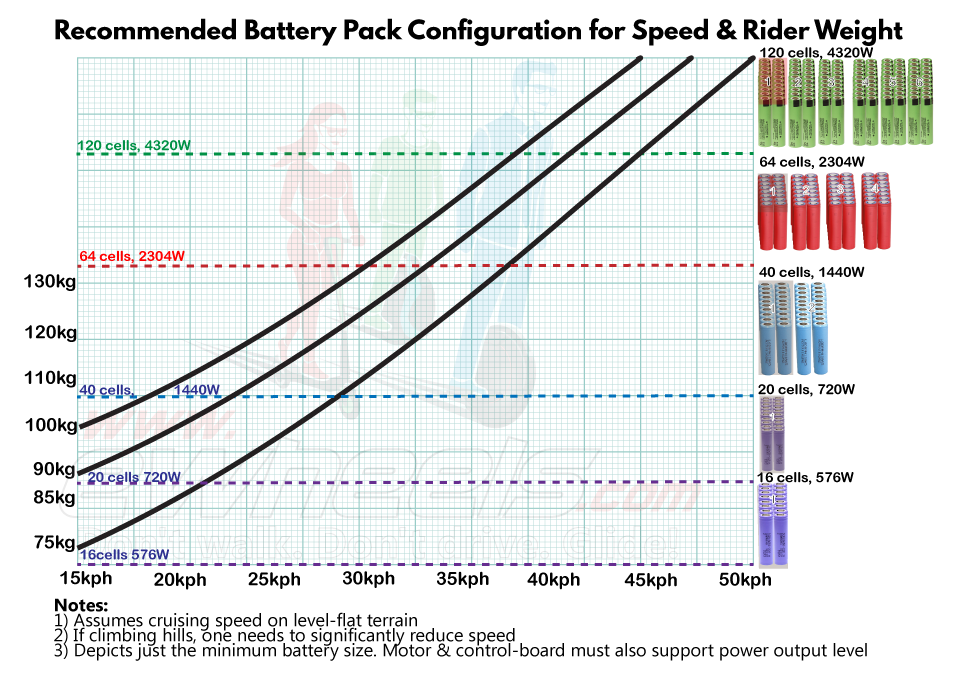 Because the cells are nearly all capable of the same 10A power output, the calculation then becomes one of how many battery cells you need for your requirements of speed & Rider weight—hill climbing expectations are also important factor for power, but to keep it simple, it’s has not been shown here.

These figures are probably on the conservative side, but for a device where getting enough power is the vital for survival, erring on the side caution is preferable.

This next illustration shows how the battery cells are configured, their capacity & power outputs in several popular Electric Unicycles. There are two defacto standardized voltages for most Wheels: 67.2v, which is comprised of 16 cells in a series & 84.2v, with 20 cells in series. Good arguments exist for both voltages, but for higher performance Wheels, the increasing trend is converging towards the higher 84.2 voltage. This is mainly on account that motors of  higher voltages are capable of higher speeds with better brown-out safety margins. Guide to Tires & Appropriate Pressures on an Electric Unicycle

What Components of an Electric Unicycle are the Heaviest?

How to Ride an Electric Unicycle: A Beginners Guide

How Difficult Is It To Ride An Electric Unicycle?

Why electric unicycle is better than other types of transport?

How to measure and track the tire pressure of electric unicycles

Don’t know Which Electric Unicycle Is Right for You? Take a Look!

A Comprehensive Guide on How to Choose a Unicycle

How Easily You Can Ride An Electric Unicycle?