When it comes to dirt bikes I have to admit, I’m not a fan. When I was in my early teens we used to go out and jump a tiny 100cc bike off a giant pile of dirt in my friend’s backyard (both of his parents were state troopers). The bike was a two-stroke monster that was loud and obnoxious and you had to rebuild the carb on it every 50 hours or so of riding. What a royal pain in the ass. I’ve sworn off two strokes and decided there is absolutely no place for them in my life. 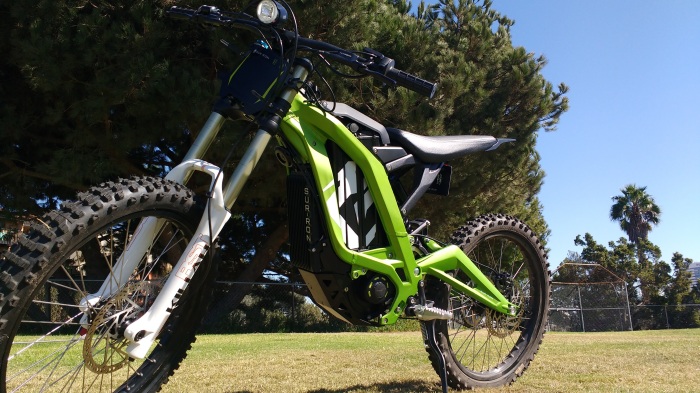 The Sur-Ron electric dirtbike is one of the few things I’ve seen come out of China that they actually have gotten right. No tranny, mostly silent, massive torque and a claimed 45 mph out of the box. The Sur-Ron dirt bike will never be ‘street legal’ in the US and the 32Ah 60v battery pack will only last for about 2 hours of normal singletrack trail riding or less than an hour of open track riding. As far as I know, there is no one else making a bike like this and selling it at this price point in the US. The Sur-Run eMotocross bike is a brand new product that will not disappoint. When I was slumming it at Luna I kept finding myself taking this bike out when I would get bored sitting around while everyone else was doing their thing.

Out in rural NY, there are motocross guys that respect ‘the rules’ many of them do whatever the hell they feel like and constantly trash our beautifully maintained singletrack mountain bike trails. For this reason alone every time I see a motocross tire track or a bunch of dirt ripped up I have to admit a little part of me gets really pissed off. It’s just a territorial thing, but dealing with this kind of energy for the last 20 years has left me pretty annoyed with dirt bikes in general. Am I being a little hypocritical? Probably. Do I care? Not really.

I like the clean way the bike is put together, everything is polished and well-built

The Sur-Ron has a very bouncy and responsive suspension with tons of travel in it. The power from a standstill is enough so that you can wheelie it if you want to, but it doesn’t unintentionally wheelie. The rear wheel is driven by a massive chain that looks unlikely to break even at the claimed 6000 Watts peak power that the motor puts out. There was a lot of noise from the motor and drive train on the bike I test drove, but I hear that the actual production motor is much quieter. I would say that the amount of noise is about equal to a 3000W Cyclone or a 6000W Tangent Ascent, although the tone of the noise is much lower than either of these two making it more agreeable to my ears. The newer production bike is about 1/2 as loud as the version that I rode. From what I understand on the ES forums this bike puts out about 3350W of power nominally which feels about right, check out the dyno graph from motomoto at the end of the article. Keep in mind that 3000W on a mid drive is going to feel a lot more torquey than a 3000W hub motor. This bike feels very similar to a 3000W Cyclone running at 72v like Curt’s early edition Rhino. Even when pegging the throttle the bike did not seem to suffer too much from voltage sag on the pack which was nice for a bike this powerful.

Even though I am over 200lbs, I was able to clock this bike at 40mph on the street using an automated radar machine near the Lunacycle office but it still felt like it could go a bit faster. It’s great riding a bike that doesn’t have any shifting or transmission. The bike is no Zero DSR but it does put plenty of smiles on your face as you tool around town. I kept expecting to get pulled over and harassed by the cops, but it never happened. I’m not saying that you’ll get away with riding this thing on the street, but I was able to ride for several hours in LA traffic without issues.

Big footpegs without shifters or foot brakes make for a clean riding experience. The beefy chain is over the top.

For my 6’10” frame I was able to ride the bike pretty comfortably with my ass all the way to the back of the seat, but it was clearly way too small for me. This bike is the perfect size for just about any child over about 10 years old or any Chinese person. I spent a month in China and I swear that everything there is built for people who are 6′ tall maximum including doorways, phone booths and subway cars. Even with my ass all the way back on the seat I could still ride the bike like a good little urban motard and was able to easily jump it over dirt piles and ride it up and down stairs.

I felt like the turning radius on the bike was too limited although I was assured by Luke that it was the standard turning radius of a motorcycle. The version I tested had the RST fork, although the production version has a Fast Ace fork that apparently has a much tighter turning radius. Luke ‘Live for Physics’ and I took out this bike several times while I was at Luna and he was downright enthusiastic about it. His first impression when riding this bike was “China … doing it right”. High praise for someone who worked for many years to bring Zero to where it stands today as the absolute leader in electric motorcycles in the USA. They ripped apart the 32Ah PF cell pack and claimed that it was “The best ebike pack they have ever seen come out of China.” Wow, just wow.

The Golden Motor has a serious bash guard on it, the frame has clean welds and looks solid

I was impressed at the craftsmanship in the frame and all the rest of the bike. Things seemed solid and built out of real quality components, not the usual hot glue and cheap ass crap you usually see come out of China. I honestly have no idea how they are able to build something at this level of quality and sell it for the price that they sell it for, but that’s China for you. A comparably sized new gas bike will run you about the same price and if you want a Zero you will end up paying at least twice the price. For someone looking for an inexpensive dirt bike that is fun to ride and will require almost no maintenance then the Sur-Ron is an excellent choice. The other nice thing about electric dirt bikes is that you can let them sit over the winter and there is no gas to gel up in the carb. The battery is easily removable (with a key) so you can bring it inside to charge or store for the winter.

Would I ever buy one of these? I really want to, but the problem is that my wife has promised to stop making love to me if I gain any more weight. We’re already doing the Brazilian butt lift twice a day and I had to join a gym. When I get this bike I would totally stop riding all my other ebikes and end up getting pretty fat. Do I want this bike? More than I’ve ever desired any other electric motorcycle before. The combination of build quality and price makes this Emoto sit squarely in a place where there is currently absolutely no competition in the US market. You can order this bike right now for $3475 right here + $160 shipping right now from Lunacycle who has an exclusive agreement for the North American market. If you’re waiting for the price to go down, don’t wait because more than likely the price will increase in the future as the demand for this bike sets in and people realize there is a real alternative to noisy, smelly, high maintenance 2-stroke 50 & 100cc dirtbikes. 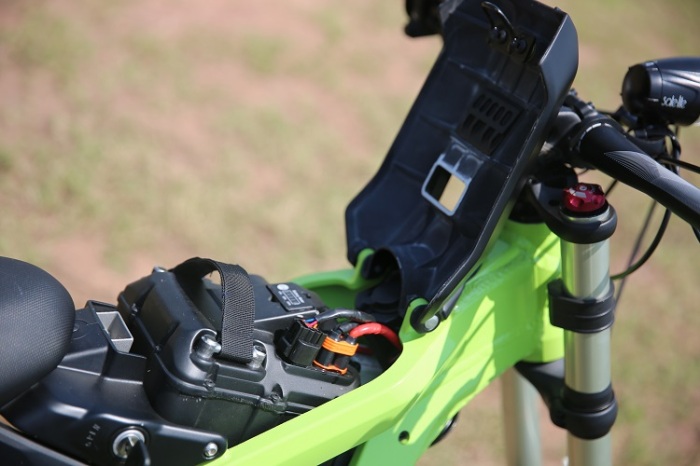 I can’t imagine anyone buying this eMoto and being disappointed with it as long as they are willing to put up with the range limitations. If you get on the bike and peg it at 40mph you are not going to be able to get that much range. I would estimate that you can get about 20 miles in the city (under 30 mph) and 13 miles of range on the highway at 40mph, maybe less. With a 1920Wh pack this bike has about 1/2 the capacity of the Zero FX ZF3.6 modular bike. This bike is really designed more for low-speed singletrack riding and jumping than riding for long distances on the highway. If that is what you want to use it for, then this eMoto might be a perfect match.

This vehicle is the FIRST pre-built electric vehicle that I have bought from Luna (instead of building myself something out of a kit) in all the years they have been in business. The bike really is that good, now I just need to do is get my hands on the wifey’s credit card. Merry Xmas to me! That’s what the holiday is all about, right? Giving?

Motomoto from ES put the Sur-Ron on a dyno and got these results, left column is HP