After Market Kit – a kit of components to convert a manual bicycle to an electric bicycle.

Amp – From Ampere, which is a measure of the amount of electrical current that passes a given point in a given amount of time. Used to describe the demand or supply of energy.

Amp Hours or AH – a measure of energy that is equal to the amount of energy that passes a given point in an hour. Usually used to describe battery capacity.  For a more exact definition please see Barrie Lawson’s comment at the end of this post.

Auxiliary Battery – is a battery that can supply current to the vehicle, but is optional, or extra, or added on.

Battery, or Energy Storage Device – is a combination of cells that create a specific voltage and current capability to power an electric motor or vehicle.

Battery Box, or Battery Package – the combination of cells that comprise a battery that provides electrical energy for the vehicle. Packed into the unique form factor for a particular vehicle. Often with BMS or motor controller inside the same box. 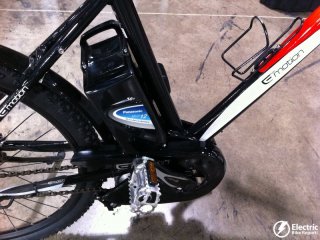 Bottom Bracket Motor – a motor located in or adjacent to the bottom bracket or pedal axel. Sometimes called a central motor or mid motor.

BMS– Battery Management System is an electronic circuit that is found on advanced batteries.

The BMS prevents damage to the battery, and prevents safety problems of battery overheating and monitors the state of charge. 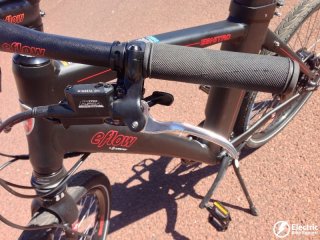 Brake Kill Switch – a device that turns off the motor when the brake lever is applied by the user.

Brushless DC Motor – longer lasting and simpler than a brush type motor. There are no wear points other than the bearings. But more costly in terms of control electronics.  Also called a BLDC Motor.

Brush Type DC Motor – uses brushes in the motor, which creates a wear point. But less expansive in terms of control electronics and manufacture.

C-Rate – is a unit of measurement that describes how fast a battery can supply current. A 1c rate means that the battery can be completely discharged in one hour. Trying to go faster than that will simply not work or might damage the battery. A 2c rate battery can be discharged in 30 minutes, or twice as fast as a 1c rate battery. This is important in regards to the power that can be developed by the motor attached to that battery. For example, a 500 watt motor that is climbing a hill might demand 30 amps of energy. If the battery is a 10 ah battery, then it must supply energy at a 3c rate to allow the motor to do it’s job. If the battery is only capable of 1c, the rider is likely to be walking this hill.

Cells – individual electro chemical devices that create electric current and are combined into packages to provide appropriate voltage and current for a specific function … called “batteries”.

Connectors – the fittings that allow the electrical components and wiring to be connected. Often easily unplugged or released.

Coulombs – are units of measurement of energy. The amount of energy equal to one amp for one second. Thus there are 3600 coulombs in one Amp Hour.  Since battery state of charge for lithium is difficult to determine by measuring voltage, sophisticated BMS measure SOC of Lithium batteries by coulomb counting.  For a more exact definition please see Barrie Lawson’s comment at the end of this post.

Current – a flow of electricity – usually refers to the amount of electrical energy being used by the vehicle.

DC – direct current, or the form of electrical current used in nearly all LEVs. 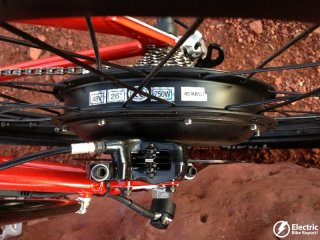 Direct Drive Motor – usually a hub motor that has no gear reduction. Such motors are simpler and quieter, but often larger and more expensive than Gear Type motors.

DIY Kit – a set of components to convert a manual bicycle to an electric bicycle.

Ebike – generic term for electric powered bikes, but in many cases meaning an electric bike that is controlled by a throttle rather than by the riders effort. (See Pedelec)

Electric Bicycle – a vehicle that is regarded by local law, wherever that may be, as a “bicycle”, with the rights and responsibilities of a manual bicycle. But having an electric motor and battery to assist the rider. 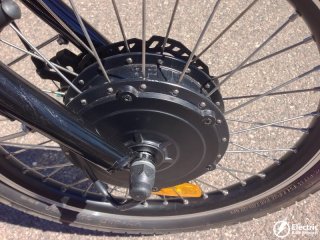 Gear Type Motor – usually refers to a hub motor that uses a gear reduction inside the hub shell. Such motors are usually less expensive and get good performance but are noisy and have more wear points.

Hub Motor – an electric motor located in the front or rear hub. 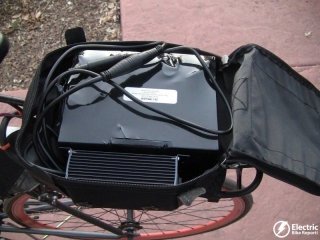 Lead Acid Batteries – these are old technology batteries of modest cost that are used in most of the worlds light electric vehicles. While heavy, they are reliable, have excellent discharge and charge capabilities, and are nearly 100% recyclable. Also called SVRLA and Pb A or Pb batteries. (nominal voltage 1.75-2.4V)

Lithium Battery – an advanced battery that has excellent performance, weight, and life characteristics. But comes in several variants such as Lithium Manganese (3.7V), Lithium Iron Phosphate (3.3V), and others. All lithium batteries are flammable and need a BMS and conscientious manufacturers / testers to reduce fire risk to users, dealers, freight carries. Lithium battery fires get a lot of press, but are actually very rare.

Max Discharge or Max current – refers to the discharge rate of the battery. See C rate.

Manual Bicycle – propelled only by human power – a very old paradigm, like sails, or manual typewriters, or writing with charcoal on a slate.

Motor Controller – An electronic circuit that controls the speed of the electric motor, as well as various other functions depending on the model and features of vehicle.

Motor – an electric motor that assists the rider. Can be located in various places and manners.

Pb or Pb A Batteries – refers to Lead Acid Batteries.

Neodymium – a rare earth metal that is used for the production of high energy permanent magnets. Such magnets are commonly found in LEV motors, and are a source of considerable cost.

Ni Cad – Nickel Cadmium batteries, not used for some time by electric bikes but  found on some older models. Toxic and lower in performance than NiMH and Lithium. (1.2V)

PAS Bike – a Pedal Assist System bike, usually designed for the Japanese market and using a proportional power paradigm – the motor delivers additional power in proportion to the effort being exerted by the rider. PAS is a Yamaha patent.

Permanent Magnet – a magnet that stays magnetized without external supplies of energy. These are used in almost all motors use on LEVs.

Push to start, or Pedal to start – some ebikes require the user to pedal a few strokes or gain a certain speed by pedaling before the motor can be activated.

Speed Sensor – is a device that detects rate of pedaling and is used to activate power in pedelecs. Not as nice a “feel” as a torque sensor system.

SOC – State of Charge is the “gas gauge” or how much useable energy is in the battery. Seemingly a simple task, this can be critical to user satisfaction and can be complex to establish. 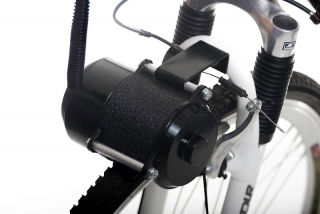 Tire Scrubber or Friction Drive – a friction roller that rides against the vehicle tire and uses the outside diameter of the tire as a gear reduction as well as the point of power application. A very simply system that was the primary paradigm in the early days of electric bikes – only the Electric Vehicle Outfitters system is still in production.

Throttle – a device operated by the user to control the speed of the vehicle. Can be twist grip, thumb operated, or other methods. 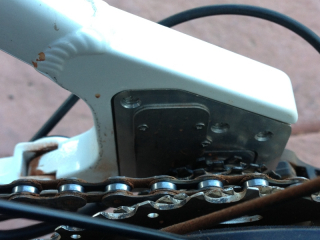 Torque Sensor – a device that detects and measures the energy applied by pedaling. This is required for PAS systems, and is preferred for pedelecs of all sorts.

User Interface – the interaction of the user and the machine which includes controls, seat, pedals, but usually refers primarily to the data display of information like speed, distance, SOC. Rapidly becoming interactive with the internet and GPS via phone and other devices.

Vehicle Controller – an electronic circuit that monitors and regulates the motor controller, user interface, battery management system and other features.

Volts, Voltage – refers to the force that a given level of electrical flow can exert. The scientific definition is complex, but see “Benjamin’s electricity as water”.

Watts – refers to a unit of measurement of how much work is done. This can be used for electrical, muscle, or ICE applications (and more). But for LEV use, watts refers to how much work is being, or can be accomplished by the system or device. For example a 500 watt motor is capable of twice the work of a 250 watt motor, if all else is equal. A human in really good condition will create about 75 watts of work over an extended period. Athletes can do better, usually for short periods.  One horsepower is about 750 watts.  For a more exact definition please see Barrie Lawson’s comment at the end of this post.

Watt Hour – is a measurement of energy usually used to describe battery capacity for LEVs. The formula that applies is to multiply volts times AH and this will give you watts. A Kilo Watt (1000 watts) is a pretty big battery that might be found on a motor scooter, while a pedelec may have about 360 watt hours in it’s 36 volt by 10 AH battery.

Wiring Harness or Harness – the wires, connectors and switches that carry electrical current and signals about the vehicle.

BONUS! Ed Benjamin’s Electricity as Water explanation – Since the author was originally trained in Biology and is not good at math, the following model was established to explain electricity on an electric bike in the early days of his career:

Think of electricity as water. A can of water (cell) is the battery and is the supply of water to the vehicle. The size of the filler hole on top of the can is the ‘rate of charge’ or how fast we can add water (energy). A bigger hole means a shorter recharge time. The hole on the bottom of the can is the ‘C rate’ or maximum current. The bigger the hole, the more current is available. Different batteries have different sized holes on both top and bottom.

The speed or pressure at which the water will flow out of the can is the voltage – or potential to do work. Higher pressure can move a motor faster or with more torque. Think of voltage as how powerfully the can will empty itself.

A battery is a collection of cans, and a battery management system is a system of valves and microchips that controls the piping serving the cells and allows them to all work together, safely and efficiently.  The more cans, the higher the voltage or force of water that can be supplied.

The wiring harness is the piping that takes the water (current) to the places where it is needed. Switches are on / off valves.

This model is not complete, but hopefully it will help some readers. The idea is not unique to Mr. Benjamin, but he wrote this version.

P.S. Don’t forget to join the Electric Bike Report community for updates from the electric bike world, plus ebike riding and maintenance tips!