Several weeks ago I was hitting a banked turn on a snowmobile track going over 25mph with chains on when the bike slipped out from under me and I hit the ice so fast I didn’t know what hit me. After that incident I borrowed a set of Dillinger 4 studded fatbike snow tires from my good friend Larry at Boxy Bikes to try them out. Larry had the cheaper 27tpi casing with the wire bead which weighed in at a hefty 3.78lbs each with 240 mounted studs. The Dillinger 4 streetprice is around $135.

The chains I’ve been using were purchased from Justin at slipnottraction.com for $105 + shipping.

For ‘big ass lugs’ (7mm) the tires that I keep going back to are the Surly Lou and Bud which were purchased online for about $130 each shipping included.

How do studs stack up next to chains and monster lugs?

I’ve been riding electric fatbikes about 1.5 hrs almost every single day this winter and in a wide variety of conditions. The average amount of snow I’ve ridden in is about 3-4″ and generally I try to stick to packed down singletrack trails as much as I can, although sometimes when it gets warmer and slushy I have to stay on the snowmobile trails. I’ve found that each of the three tires excel in different conditions. I’ve listed each tire in the order that I would consider it to be based on different conditions with a number from 1-10 rating how good that tire is in those conditions. 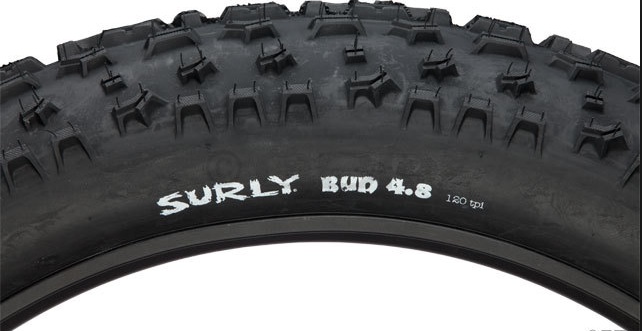 The King of Fatbike Front Tires – hands down

Chains rock in powder, but not as much as the Surly Bud\Lou tires. Nothing else compares.

Here is an example of some sample bike tire widths 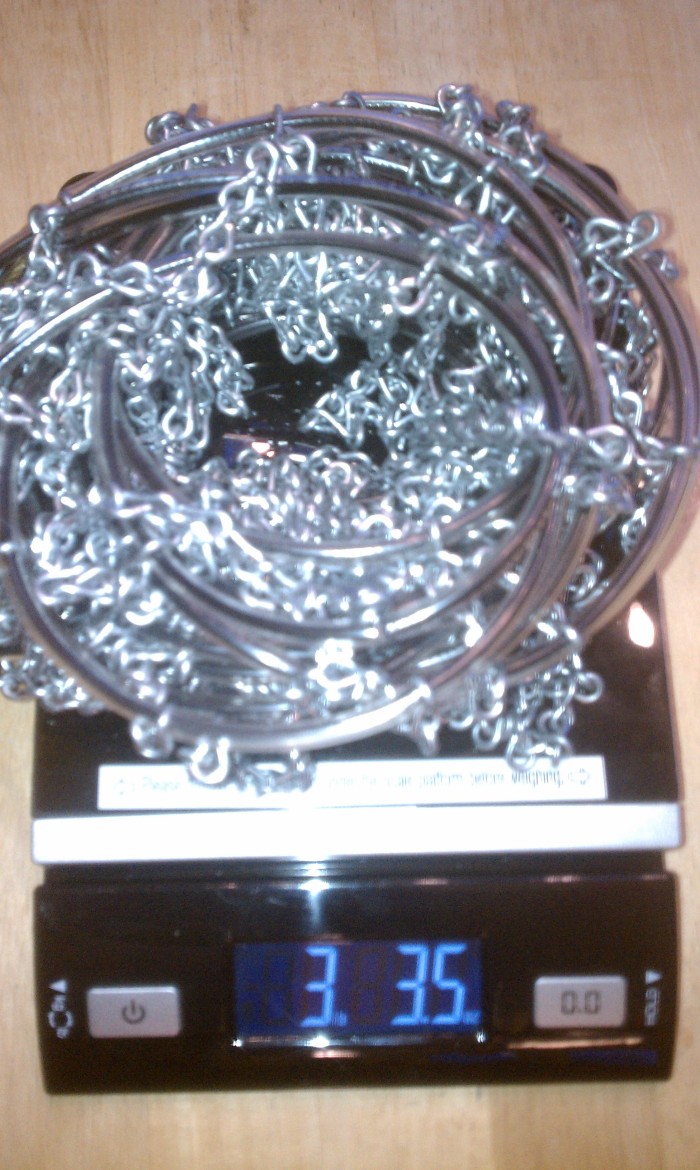 Fatbike chains add a little over 1.5 lbs per tire.

With chains you will need a little more than 1/4″ clearance all the way around the tire. Chains are also the heaviest option adding about 1.5 lbs per tire. People often wonder if you really need chains on the front, to which I say if you can only mount one chain, the front is the place to have it. Having the front wash out in turns is no fun and having the rear tire fish-tail under power is actually pretty fun. Losing traction in the rear is generally recoverable by putting a foot down, losing traction in the front generally isn’t.

Even with checking the adjustments before and after every ride I still get this mess from time to time. Can you find the derailleur in that picture? Guess I need to locktite the turnbuckles.

For commuting the studded tires seem to be the only way to go. Who wants to wipe out on glare ice and end up under the wheels of a truck? If you good want snow traction that you can take off and put on at will, then chains are the best bet (but locktite the turnbuckles esp on the rear). If you want raw performance in the powder Bud\Lou is the only way to go. For the most part get the widest tires with the biggest lugs you can squeeze into your frame and run them at 5-6 psi for maximum enjoyment in the woods.

Our first review of the Slipnot chains is here.

The Surly Lou rear tire is reviewed by us here.