Halfway between mountain bikes and road bikes, hybrid bikes are incredibly common. Watch people riding to work or pootling around riding spots away from traffic and you’ll see lots of hybrid bikes. But just what qualifies a flat-bar bike as a hybrid bike, and what makes them Britain’s best-selling bike type?

In a sensible world, a hybrid bike would just be a bike, and all the specialist bike types would get their own particular names. But the popularity of different bike types follows fashion trends. Before the mountain bike boom of the late ’80s and early ’90s ‘10-speed racers’ and touring bikes ruled the roost. 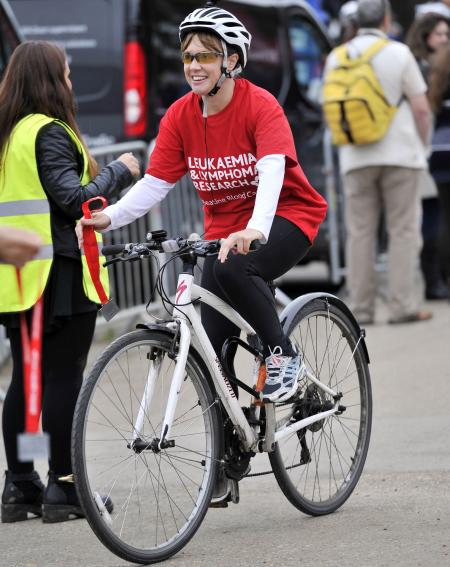 Then the mountain bike came along and reminded people that a bike with powerful brakes and an upright riding position was fun to ride, and very practical on potholed city streets.

A mountain bike’s fat tyres and sturdy build is overkill for most UK riding, though. A bike soon emerged with the flat handlebar and friendly controls of a mountain bike, but the lighter frame and larger, quicker wheels of a road bike: the hybrid bike.

>>Read more: Beginner's guide: how to choose and buy your next bike

That broad definition of hybrid bike leaves a lot of scope for variation. At one end of the scale are flat-bar road bikes, which as the description suggests have the very skinny tyres and lightweight, close-coupled frame of a road bike, but with a flat bar. Just the thing for zooming through sun-drenched Tuscan lanes, if not so great for rainy, potholed British city streets. 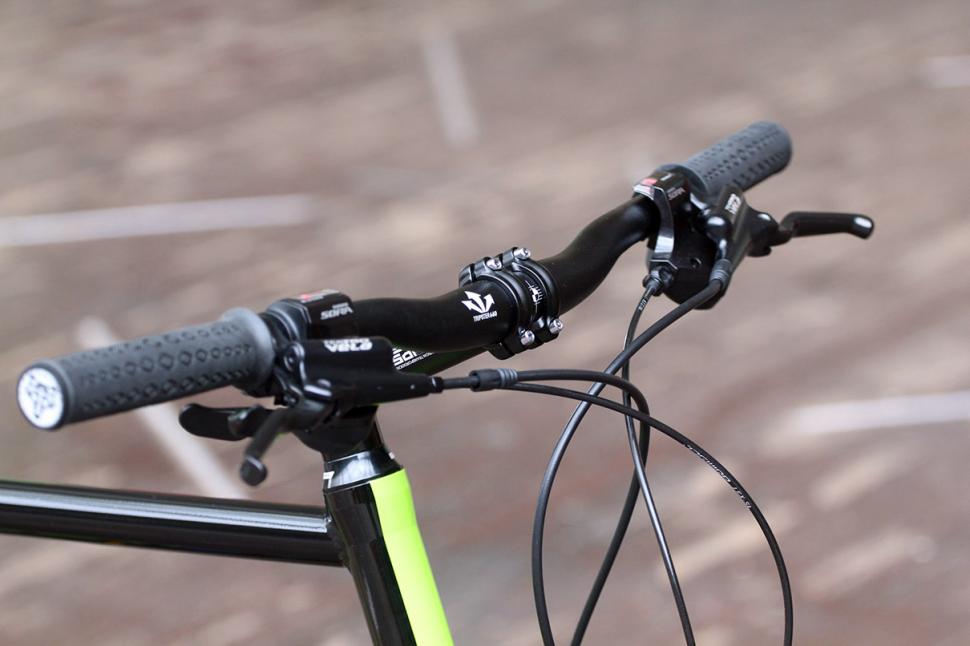 Fatter tyres with deeper treads are more common though, and usually provide the grip and cushioning that make hybrid bikes really versatile. You can easily take a hybrid places where you'd hesitate to ride a road bike, or where very skinny tyres need a high level of skill and care. Canal towpaths, forest roads and easier singletrack trails are all accessible on a hybrid bike.

A few hybrid bikes come with all this and more as standard equipment, especially if they are also intended to be sold in Europe, where people expect their bikes to be ready to roll as practical transport straight off the shop floor.

Such a ‘fully-equipped’ hybrid bike will have a pannier rack and mudguards, dynamo lighting, a built-in lock and even that most reviled of accessories, a kickstand for parking convenience. 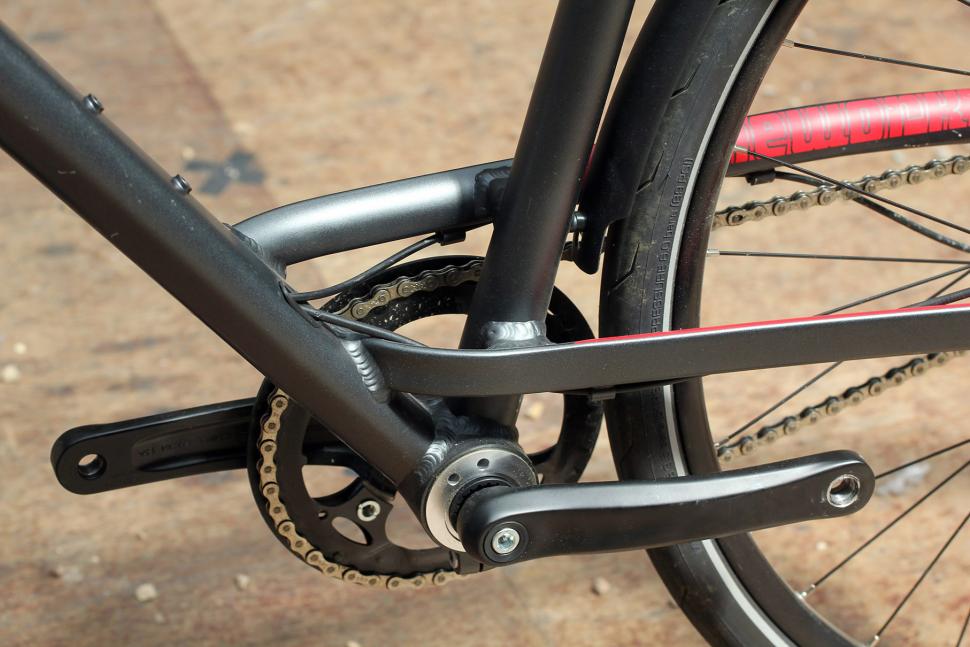 Hybrid bikes are almost always made from aluminium for its combination of strength and low weight. They sometimes have suspension forks, which are arguably a bit of a gimmick, adding weight and cost without adding much useful function.

You will also find steel-framed hybrid bikes, usually aimed at trendy urban riders. If you’ve money to burn there are also a few manufacturers producing hybrid bikes with super-light carbon fibre frames, which sounds daft until you consider carrying a bike up several flights of stairs to a top-floor flat or room in a shared house.

For the most part, hybrid bikes use derailleur gears, with mechanisms that move the chain around sprockets on the rear wheel and cranks. These are light and simple but a bit vulnerable to damage, so a few manufacturers offer hybrids with fully-enclosed hub gears. 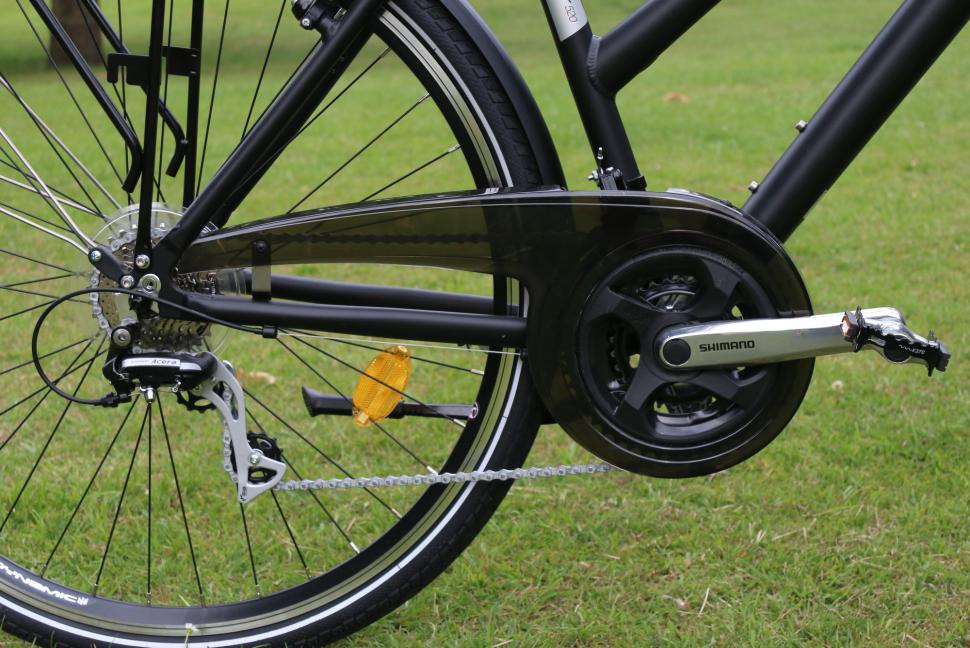 Either way, the controls are on the handlebar, right next to the brake levers and easily reached as you ride; this ease of use is one of the things that makes hybrid bikes popular. For maximum simplicity, some hybrid bikes just have a single gear. 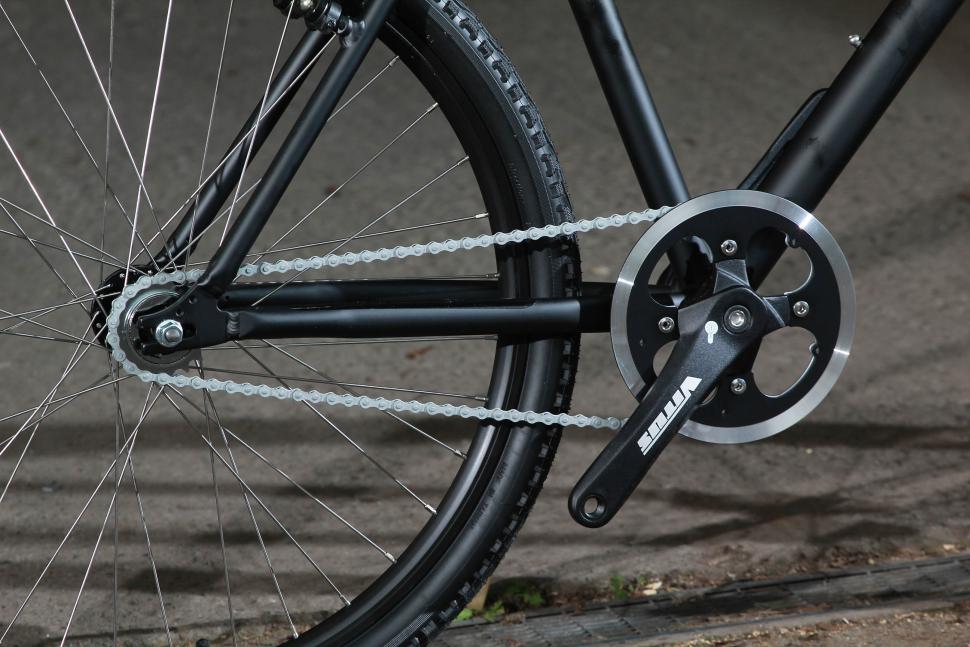 Hybrid bikes with derailleur gears usually have three sprockets (called chainrings) on the cranks and between seven and ten at the rear. This gives a really wide range of gears so you can zoom downhill and still climb comfortably.

Hybrids have always borrowed braking technology from mountain bikes, and now use either V-brakes or disc brakes. 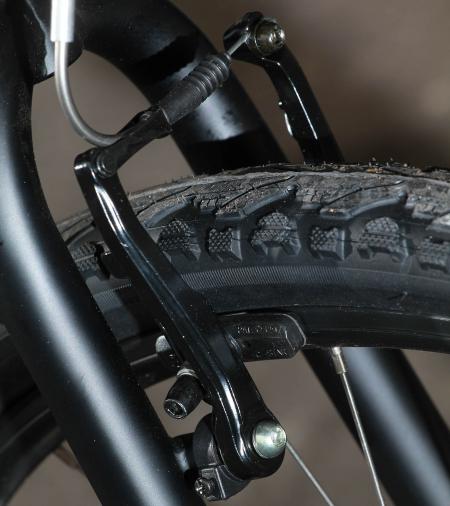 V-brakes mount on special bosses on the frame near the wheel rims and have a brake cable that pulls the top of two arms to bring the pads against the rim. 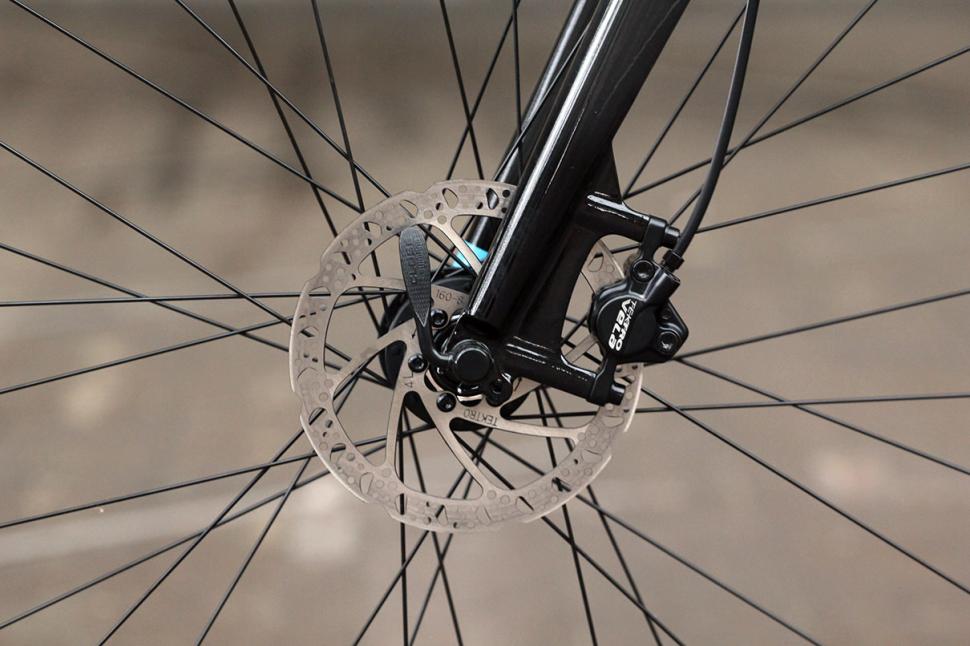 Both provide good braking in the dry, but discs perform better in the wet because the braking surface is further away from the road.

Most hybrids use the same wheel size as drop-handlebar road bikes, known as 700C. The designation comes from a French wheel sizing system and used to indicate a tyre that was 28 inches (700mm) across, though most modern 700C tyres are smaller than that.

A few hybrids use mountain bike size 26-inch tyres or the intermediate size known as 27.5 inches or 650B. The wheels are therefore a bit smaller and tougher, though the tyres on such a bike will be lighter and smoother than mountain bike knobblies. 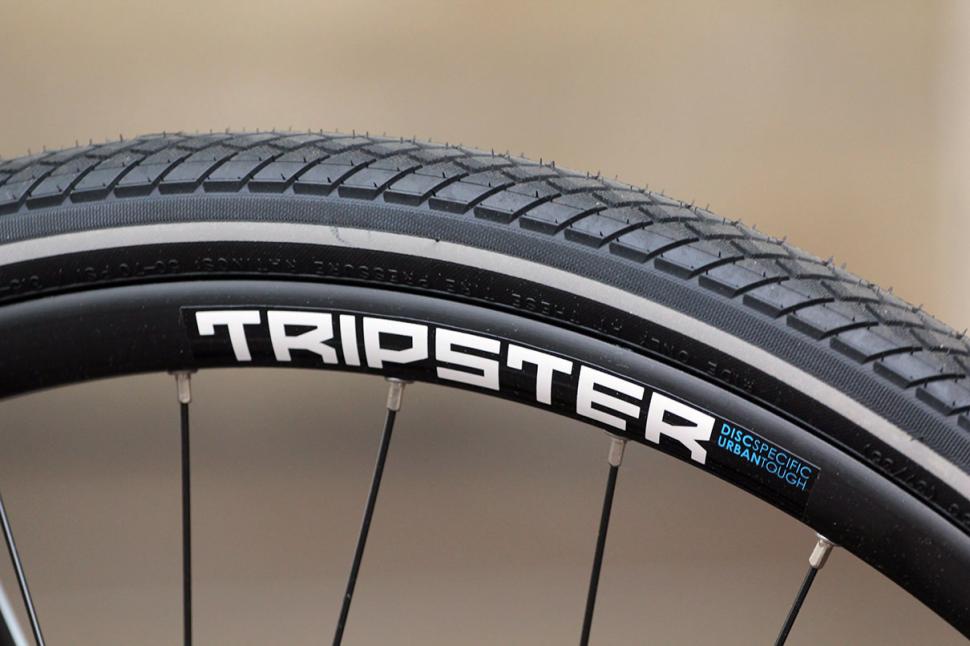 Hybrid bikes have a wide range of tyre sizes, from lightly-treaded narrow tyres (usually 28mm or so wide) for speed, to fat tyres with chunky tread for dirt tracks.

One popular option is highly-puncture resistant tyres such as Schwalbe Marathons, which will ward off all but the nastiest sharp objects.

If you’re going to do more than pootle round the woods on dry days, there are a few things you should consider buying along with your new hybrid bike.

Mudguards: Spray from the tyres makes a big contribution to a winter soaking, so if you’re going to ride when there’s a chance of rain (all but a few days per year in the UK!) mudguards will keep you a lot drier. 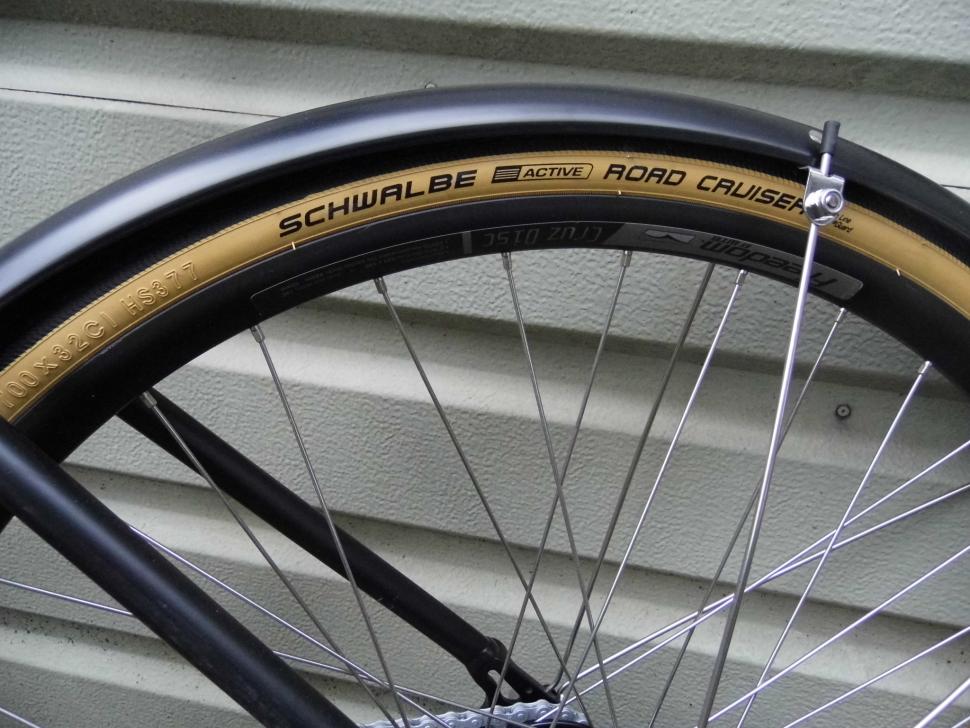 Clip-on mudguards can be fitted to bikes with tight clearances, while if your bike has more room in the frame you can use full-coverage bolt-on guards.

Rack & luggage: If you want to carry stuff while you ride you have two options: panniers that clip on to a rack bolted to the rear of the bike; or a rucksack. 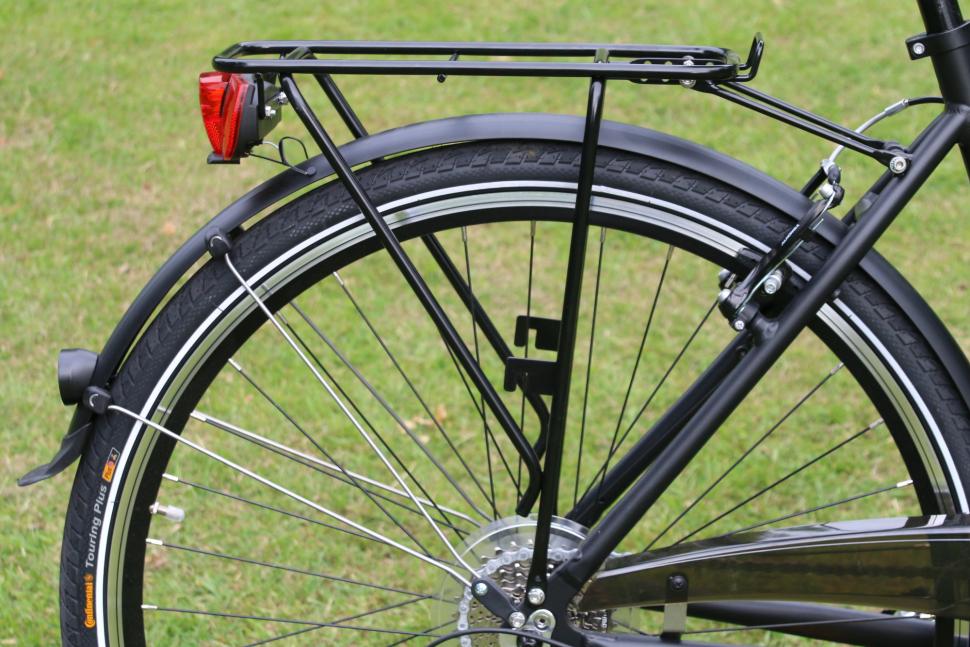 Panniers are more comfortable and allow you to carry more, but are awkward off the bike. A rucksack is easy to carry off the bike, usually has lots of compartments to help keep you organised or lose your keys in, but will give you a sweaty back. You decide your priorities and make your choice.

Lights: A legal requirement if you’re going to ride at night, and just sensible too. A flashing rear light is now almost a sign of a bike; many riders like to pair a flasher with a constant light because it’s easier for drivers to track the position of a steady light on dark roads. Up front you have a huge range of choices from small lights that will get you seen to high-power systems that light the road for many metres ahead.

Lock: As a rule of thumb, spend 10% of the cost of your bike on a lock. Look for Sold Secure ratings and go for a lock that’s rated at least Silver if you’re going to leave your bike parked on the street for any length of time. 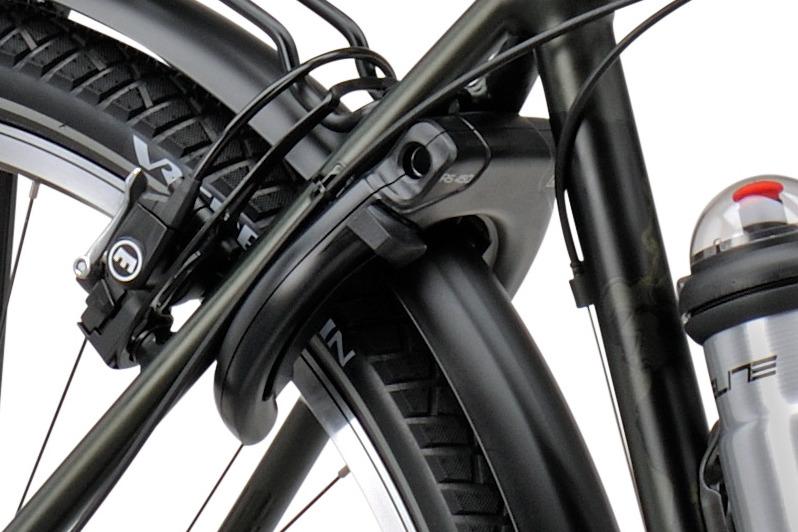 If your bike has the necessary mounts, a frame lock like the one on a Koga trekking bike, above, is wonderfully convenient for short stops

Fully-equipped hybrids: As mentioned above, it’s possible to get a hybrid bikes with all the trimmings, and it’s a lot cheaper that way.

How much to spend

Hybrids are great budget transport. You can pick one up for less than £200, and by the time you get up the price range to around £300 there are some really quite nice bikes.

Buy a £300 hybrid bike on the Cycle To Work Scheme and the repayments will be trivial, especially compared to the cost of public transport. In many cities, you'll be significantly better off: a London Zone 1-3 Travelcard costs £153.60 per month, a Bristol Plus travelcard is £192.00 and a Cambridge Megarider Plus bus ticket is £96. Hybrid bikes pay for themselves very quickly indeed,.

As with almost all bikes, hybrids get rapidly nicer to ride as you climb the price range to about £1,000, after which you get into diminishing returns.

If you want disc brakes, you’ll need to spend about £400 and up.

Fully-equipped hybrid bikes, or ones with a rack and mudguards, are scattered through the price range.